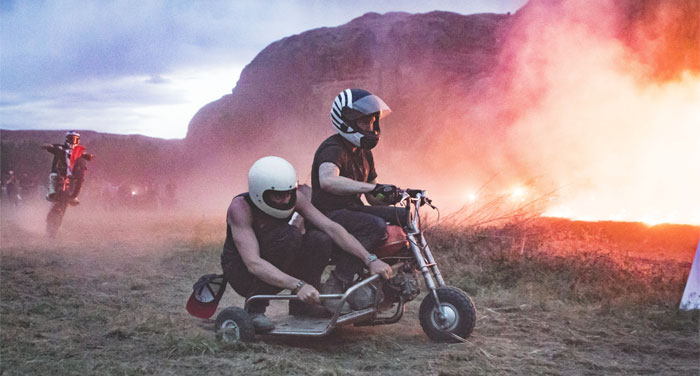 One night in early July of 2018, at least three rhino poachers set out with a malevolent goal: to sneak into the Sibuya Game Reserve in South Africa, kill an endangered rhino, steal its horn, then sneak back out - all on foot. If successful, they stood to make a handsome profit. But, the poachers overlooked one very important detail. Lions hunt at night.

Early the next morning, the anti-poaching unit heard a disturbance among the lions, but thought little of it. It wasn’t until the following day that a high-powered rifle, an axe, wire cutters, and several days’ worth of food were spotted near the pride. The unit also discovered three pairs of shoes, three pairs of gloves – and the remains of three humans.

The poachers likely thought they had a good plan. And parts of it were, but when the stakes are high, good isn’t good enough.

Most would agree that to truly be wise, you need to acquire knowledge and experience. But, what many people overlook, is that wisdom also involves the elimination of traits - namely, stupidity. In other words, if you want to be wise, don’t be stupid. If only someone had told the poachers.

Gaining wisdom by means of losing stupidity is based on a principle called inversion.

Inversion, as demonstrated in Top Gun, is the process of turning something on its head. It works because it provides a different (often optimal) perspective than the traditional one. It can be particularly effective when it comes to achieving personal and professional goals, from relationships to physical health.

For example, if you are in the early stages of a romantic relationship, you might ask, “What will ensure this is a happy union?” But, if you were to follow the inversion principle, you would ask, well, the inverse: “What will damage this relationship?”


Avoiding these types of behaviours won’t guarantee spousal bliss, but it will dramatically improve the odds of success.

Below are three ways the inversion principle can be useful.

If you are looking to improve something about yourself, the first step is usually to open yourself up to some in-depth self-analysis. This isn’t easy. But, if you are willing to do it, over time, you’ll discover that you are able to accurately assess both your strengths and weaknesses.

While there are times when working on your strengths should be a priority, there are also times when it’s best to work on your weaknesses.

As a young golfer, Tiger Woods was consistently the most talented player in a tournament. Although he was often victorious, he won less often than talent would predict. The culprit was his tendency to wilt under pressure. To rectify this weakness, he enlisted his father’s (a former Green Beret) help.

For months, Earl Woods treated every round of golf as psychological war. Every time they played together, he belittled, swore at, and mocked his son’s golf game. He’d even cough and drop his golf bag in the middle of Tiger’s swing. Anything was fair game, unless Tiger uttered pre-arranged “safe words” that would halt his psychological training. He never did.

Though excruciating, little by little, Tiger grew mentally tougher, eventually becoming one of the most unshakable athletes in the world. In his prime, no one handled the pressures of a final round better than Tiger Woods.

It would have been easier for Tiger to keep working on his strengths. But, by choosing to work on his most glaring weakness, he not only stopped losing tournaments he should have won, his mental strength also enabled him to win matches he should have lost.

2) Looking outward and learning from those around you

I met my wife a few months before turning 40. This meant I was largely single in my 20s and 30s, and I used that time to observe the people who were in relationships around me. From friends to family, I wanted to know why some relationships worked and others didn’t.

I learned that good relationships often valued trust, respect, and consideration, while people in bad relationships struggled to communicate, talked at each other, and were usually pretty selfish.

However, I noticed something peculiar. Much like how one bad apple can rot a bushel of good ones, negative qualities seemed to do more harm than the good seemed to help. In other words, to improve a relationship, it seemed more important to minimize harmful behaviours, as opposed to increasing the positive ones.

So, although I noted the qualities that helped relationships flourish, I paid more attention to the damaging ones - compiling a list of sorts of what not to do in a relationship.

I found that it was both easier to spot someone else’s romantic misstep, and be objective.

3) Reflecting back on yourself through others

A year and a half ago, I was lounging in my favourite chair while talking with my wife. It seemed an apt time to bring up the future. However, instead of asking, “Where do you see me in the next five years?” I asked, “What is your biggest concern about me over the next five years?”

This may sound bold, but I was confident her answer would be relatively benign. It wasn’t. She was concerned that my lifestyle had become sedentary, causing my energy levels to fall, and my mood to go from perky and mischievous to flat and uninspired. She was concerned this trend would continue and that my lifestyle would become increasingly slothful.

Hearing those words was humbling. Like many men past their physical prime, my self-perception was, to put it kindly, somewhat inflated.

The road to getting back in shape has not been easy. However, I currently work out four to five times a week, my cardio has never been better, I’ve added more than 10 pounds of muscle, and my body weight has dropped almost 20 pounds. I’m feeling better in my own body, my energy levels are higher, and I’m much happier.

But most importantly, Tanya’s biggest concern has been eliminated. Reflecting back on that day, asking about her concerns provided a more effective answer and reaction than, for example, asking, “Where do you see us in the next five years?”

Inversion is powerful because it's counterintuitive. We are more apt to think improvement comes from increasing something, not taking something away.

Like any tool, it’s not the only one you should use. But when you do, it will often help you hone your critical thinking and problem-solving skills, and make better decisions.

As Charlie Munger is fond of saying, “It's remarkable how much long-term advantage people like us have gotten by trying to be consistently not stupid.”


Information in this article is from sources believed to be reliable, however, we cannot represent that it is accurate or complete. It is provided as a general source of information and should not be considered personal investment advice or solicitation to buy or sell securities. The views are those of the author, Matthew Lekushoff, and not necessarily those of Raymond James Ltd. Investors considering any investment should consult with their investment advisor to ensure that it is suitable for the investorâ€™s circumstances and risk tolerance before making any investment decision. Raymond James Ltd. is a Member - Canadian Investor Protection Fund.