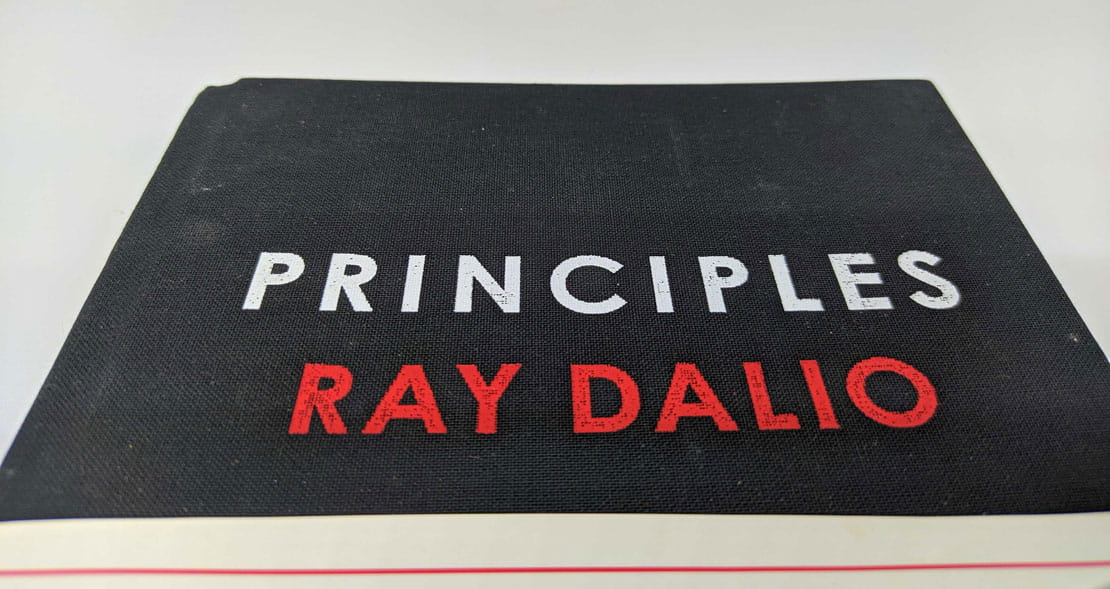 Ray Dalio is the founder and co-CIO of Bridgewater, the world’s largest hedge fund. Though known for his success, he’s also respected for his intellect and unique manner of navigating the world. Since reading his book Principles, I’ve increasingly drawn from the principles by which he lives.

What follows are the most important life lessons I’ve gleaned from Dalio. I will cover the financial and economic lessons I’ve learned from him in a later post.

Decide:
1. What you want
2. What is true
3. How you can achieve #1 in light of #2 with humility and open-mindedness

Examine the patterns that affect your life and the world. This will help you understand and navigate cause-effect relationships.

Dreams + Embracing Reality and Dealing With It + Determination = Successful Life

If you want a great life, hard work is required. It won’t happen by accident.

The first step is to have goals or, as Dalio refers to them, dreams. These are based on what’s important to you and what will make you happy.

The second part is to embrace reality, or “to figure out how things work” then develop the best plan to achieve your goals. Life is not perfect. Politicians lie, friends betray, criminals steal, and luck is too often the difference between success and failure. The world, unfortunately, is what it is.

Despite how justified it may be to complain or wish things were different, it’s rarely the best strategy. Dalio has observed that successful people - those who change the world - accept that life is the way it is (reality). These include the laws of nature, how people act and react to each other, or the rules of your country. However, they also navigate the world (deal with it) in order to best serve their lives and purposes.

Martin Luther King Jr. saw the world for what it was. Though he didn’t like what he observed, he needed to accept that reality before taking the next step. Once he did, he was able to use that knowledge to build an effective movement that would go on to improve the plight of millions of people.

The last part “determination” is the most challenging. After you know what you want and understand how things operate, hard work is required. Though an optimal strategy is vital, hard work and grit may be even more important - especially when faced with obstacles and failure. As Einstein once said, “It's not that I'm so smart, it's just that I stay with problems longer.”

To illustrate his full process, Dalio has created a five-step process:
1. Have clear goals
2. Identify, but don’t tolerate the problems that stand in the way of your goals
3. Accurately diagnose the problems to get at their root causes
4. Design plans that will get you around them
5. Do what's necessary to push these designs through to results

No one enjoys painful experiences. We’re inclined to avoid them whenever possible. Some even turn to drugs and alcohol in an attempt to cope with them.

Dalio, on the other hand, views pain as an opportunity to learn. He dissects these episodes to understand why they occurred. He then uses what he learns to update his knowledge and the way he lives his life. And when a similar situation arises in the future, he’s prepared.

Be radically open-minded (but also assertive)

Being open-minded is an under-rated virtue. Perhaps the most under-rated. It’s likely a decent portion of our beliefs are either wrong or flawed. So it makes sense to keep your antenna up and pointed in all directions.

Unfortunately, as we grow older, our beliefs tend to calcify. Paul Graham explains that one of the reasons for this is our self-perception. Once we identify as a type of person or member of a group, we are pulled towards a manner of thinking. It’s like gravity.

The antidote, in Dalio’s opinion, is to become radically open-minded. Unfortunately, this is harder than it seems. One way to think about it is Marc Andreessen’s philosophy of having “strong opinions weakly held,” which involves firmly sticking to your convictions - until you realize they are wrong. As Dalio likes to say, “There is always a good path. If you don’t see it, you just need to keep looking in a good way, with the help of others.”

At Dalio’s firm Bridgwater, radical open-mindedness is foundational. And it’s implemented through an idea meritocracy. The best ideas are always used, regardless of whether they come from the CEO, middle manager, or junior employee.

Throughout history, groups that worked well together usually realized outsized advantages.  Understanding this, Dalio sought to discover how Bridgewater’s employees could get the most out of themselves and each other.

He learned this necessitates finding the smartest people who see things differently from each other. However, he also realized this wasn’t enough. Given how personalities complicate interactions, he also sought to learn how Bridgewater’s people could optimally work together. As with many things, Dalio took this to the extreme.

Every employee at Bridgewater takes a detailed personality test and has their expertise identified. These details are then catalogued on a report referred to as a baseball card, which is widely accessible within the organization. This information is used to help individuals not only better understand themselves but also to build optimized teams.

We don’t need to go as far as Dalio, but surrounding ourselves with wise people and figuring out how to best get along is a great way to get the most out of life.

Learn how to make decisions effectively

Dalio believes that knowing how to make effective decisions, while having the courage to do so, is another way to get the most out of life. His approach is two-part: take in all the relevant information and then decide. This may sound simple, but it’s far from it.

Dalio begins the first part by gathering and synthesizing the information he consumes, then sifting through their various levels. This includes seeking out the smartest people he can find to triangulate his opinions with them. Part of this process includes applying his vast knowledge of history to provide context.

Part two, the deciding part, involves examining the various levels of information he’s gathered. This begins with his values and moves progressively through each step required to achieve his goal.

To illustrate, he cites an example of someone who desires meaningful work filled with learning. The idea flow could look like the following:
• Subordinate Concept (Value): I want to be a doctor
• Sub-Point: I need to go to medical school
• Sub-Sub Point: I need to get good grades in the sciences
• Sub-Sub-Sub Point (Decision): I need to stay home tonight and study

Although this may seem intuitive, most people seem to struggle in converting their current actions into future goals.

Before arriving at a decision, Dalio always asks himself questions like, “Am I learning?” or “Have I learned enough yet that it is time for deciding?” These questions always stop him from accepting his first available option, no matter how good they seem.

Yet, as important as the strategies above are for making good decisions, Dalio believes poor decisions are largely due to emotions. In his words, “One of the most important things I’ve come to understand is that most of the processes that go into everyday decision making are subconscious and more complex than is widely understood.”

And that “the biggest threat to good decision making is harmful emotions''. This is one of the reasons he meditates every day.

In 1968, the Beatles went to India to study meditation. Intrigued, Dalio tried it as well and fell in love. He’s been meditating now for more than 50 years and believes it has helped him become more open-minded, provided a higher-level of perspective, equanimity, and creativity. He also feels it slows things down for him, so he can act calmly, even in the face of chaos. Dalio attributes meditation as one of the main reasons for his success.

Calvin Coolidge once famously stated, “Nothing is more common than unsuccessful men with talent.” He believed their issue was a lack of hard work and persistence.

While Dalio would agree, he’d consider Coolidge’s notion incomplete. In Principles, he wrote, “In my opinion, these two barriers - ego and blind spots - are the fatal flaws that keep intelligent, hardworking people from living up to their potential.”

In reference to our blind spots, he wrote, “We all have areas of our life we are blind to. Some are our strengths, but many are our weaknesses. If we remain blind to our weaknesses, they will hold us back in many areas of our life. Due to this, we need to seek out our blind spots and figure out how to work around them....The biggest mistake most people make is to not see themselves and others objectively, which leads them to bump into their own and other’s weaknesses again and again.”

Dalio prescribes two remedies for these ailments. To become “radically open-minded” and to learn from people who are wise and radically open-minded. “Most people make bad decisions because they are so certain they’re right, they don’t allow themselves to see the better alternatives that exist. Radically open-minded people know coming up with the right questions and asking other smart people what they think is as important as having all the answers.”

Perhaps Mark Twain said it best: “What gets us into trouble is not what we don't know. It's what we know for sure that just ain't so.”

Meaning is fundamental to the human condition. In Man’s Search for Meaning, psychologist and Holocaust survivor Viktor Frankl wrote the difference between those who survived the prison camps and those who didn’t was often whether they had something to live for. Those who didn’t, died more often.

For Dalio, the two most important things in life are having meaningful work and meaningful relationships.

It’s easier to get excited when you love what you’re doing, or when the result will help those you care about. Importantly, work isn’t necessarily what you do for money. It can also be a hobby or passion.

Meaningful relationships are also essential for a good life. Some will be personal, some will be professional, and, if you’re lucky, some are both. To Dalio, a good life is one where you “make your work and your passion one and the same and do it with people you want to be with.”

Ray Dalio is a unique figure. However, as extreme as some of his ideas may seem, I respect the thought he’s put into absorbing, framing, and using information to make wise decisions. His success speaks for itself.

Some of my favourite Ray Dalio Quotes

“A little forethought and a lot of follow-through can change your life!”

“If you are open-minded enough and determined enough, you can get virtually anything you want.”